Our Charlottesville storefront apothecary, C'ville Soapbox, made the news in the city's Daily Progress.

Thanks to Edible Blue Ridge Magazine for a very nice mention of C'ville Soapbox and our Whale of a Bar Suds soap, made with local beer!

We are so grateful for our wonderful customers and honored to have been voted Best Apothecary 2016 for the annual Best of Virginia contest held by Virginia Living Magazine!

We were featured in nearby Culpeper's Star Exponent, after returning our home base to Virginia at the beginning of Brian's two year deployment to Japan. 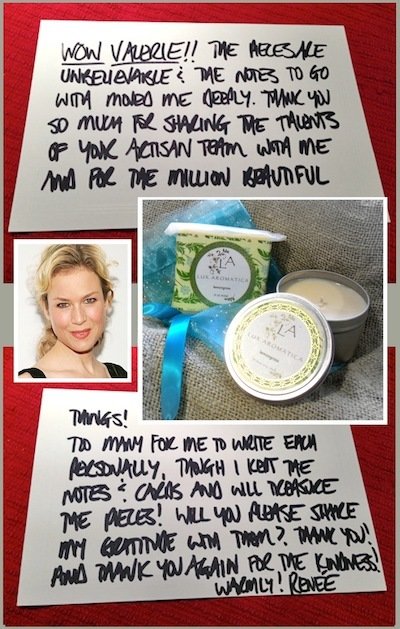 Along with other TAG artisans, we gifted Renee Zellweger with our luxury moisturizing soap and matching candle, in our very popular Lemongrass scent.

We created a custom candle fragrance in a warming winter blend of woods, spices, and citrus, then poured them into recycled Italian glass jars, and sent them to Los Angeles for gifting Golden Globes press in coordination with The Artisan Group.

Lux Aromatica, in association with The Artisan Group, participated in a luxury celebrity gift lounge hosted in honor of the nominees and presenters for the 2012 Primetime Emmy Awards. Our soy candles were gifted to select talent managers, publicists, agents, stylists, and other key industry representatives at an invitation-only cocktail party mixer.

We gifted Paula Abdul with a 50 hour soy candle in a fragrance we created uniquely for her. Named Little Lavender Dress, the fragrance was based on lavender with notes of vetiver, jasmine and Spanish rock rose woven in for a smoky, sultry texture. We had the pleasure of gifting Miss Abdul through The Artisan Group, a professional organization of highly skilled indie artisans. Read Paula's tweet about how much she loved her goodies!

Your cart is empty.